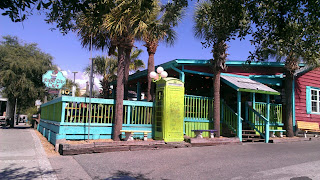 One of our favorite stops in Myrtle Beach is the River City Cafe. It's a little restaurant on 21st Ave N that has some great burgers.

Dawn always gets the Philly Cheeseburger, but substitutes the patty for a turkey burger. She raves about how good it is every time we go, so if that's up your wheel house you might want to give it a shot. 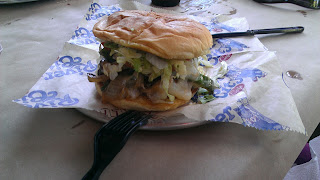 I'm usually a bacon cheeseburger kind of guy. I'm a pretty picky eater, so I don't like a lot of gunk on my burgers. Dawn spotted the "Cowboy Burger", and told me I should give it a shot. It's a cheeseburger with pork rinds, jalapenos, BBQ sauce, and their spicy mayonnaise. I had thought about it, but was just going to play it safe. I didn't want to spend $7 for a burger and it be horrible and me not eat it.

The waitress comes out and asks us for our order and I told her I was bouncing around the idea but wasn't sure about the BBQ sauce. She said to give her a second and she'd bring a little out for me. Once I tried it, and from the peer pressure, I decided that I would go with the Cowboy Burger, but wanted everything on the side so I could construct it. 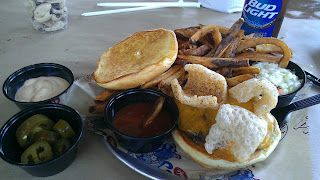 I don't eat a lot of peppers on things (for reasons stated above), but wanted to give it a try. I ended up adding everything to the burger except for the mayo. 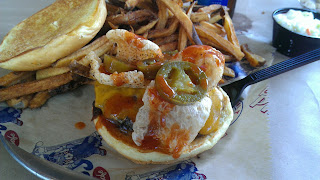 Once it was put together, it was a rather large bite. 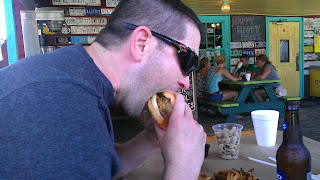 I have to admit, the burger blew me away. The crunch of the pork rinds and the heat from the BBQ sauce and jalapenos was perfect together. As I was eating it I just couldn't help but to thing, "this is so good, but it's missing something."

The waitress came by to check on us and I told her that the burger was amazing, but it'd be better with bacon. I mentioned that I was going to ask for some before, but figured I was being too much of a pest to begin with so I didn't. Before I had time to tell her no, she said she'd get me a few slices to put on it and was gone. 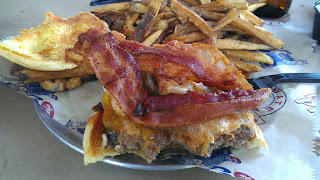 She came out with 3 full slices (I ate the other slice by itself), and just as I imagined ... it was AMAZING.

As we're about to finish eating, I looked up and these sat right in front of me. Now, a mullet in today's world is rare enough, but to spot 2 mullets together in the wild is virtually impossible. It's like finding 2 Native Americans at the same time ... it just doesn't happen. 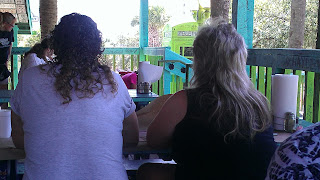 If you're ever in the Myrtle Beach area and find yourself craving a burger ... go by River City Cafe and enjoy. 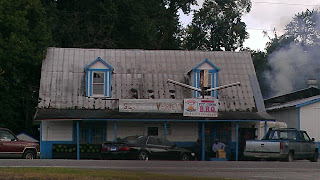 Over the past few years, my family has been going to the beach for a long Labor Day weekend. This year was no different, but I wanted to make it a little more memorable. For the months leading up to the trip, I've been talking Dawn and the rest of the family into driving an hour+ away from the beach to eat at Scott's BBQ and an hour+ back. It seemed like a no brainer to me, but a few others didn't want to "ruin their vacation" spending so much time on the road. I had to meet a guy in Sumter to pick up some bowling pins for a game I'm going to make for a tailgate later this year, so Dawn suggested we just go on down to Hemingway and eat on the way down.

We left the house shortly after lunch and started the trek down. Neither of us had ever been to either of these places, or the towns between, so it was a very eye opening ride. Everything had an old school feel to it. Some of the towns had really nice downtown areas with older buildings, and a classic small town in the South feel to them.

Hemingway is a little different from those towns. From what we saw, it was more woods and fields than shops and diners.

What Hemingway may miss in "modern living" they definitely make up in with BBQ. Scott's BBQ has been in the NY Times and other publications and also on numerous TV shows. When you go to a place like this you always have to worry if it's a tourist trap, or it's really that good and the locals enjoy it as well.

We were the only (obvious) tourist when we were there until another group of guys walked in dressed in business casual attire. They may have been local, but I highly doubt it. As a rookie, I didn't notice they had their own homemade pork rinds for sale. As we were eating, I saw numerous people walk by with multiple bags of it. Another way to know that we weren't from around there. The locals were picking up to-go boxes of pounds of pork. Yes, boxES of POUNDS of pork.

We apparently got there just in time, because the wait was only about 10-15 minutes. By the time we left, I would guess it was a solid 30-45 minute wait. 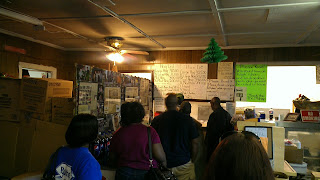 I've mentioned it time and time again, but when I think of BBQ joints, I don't want some fancy restaurant with cloth napkins and $3 drinks. When I think of a BBQ joint I think of exactly what Scott's is. It's an old building with a couple of tables, a line out the door, hand written signs, and a welcoming feel.

My favorite sign is easily the "no drop down pants" sign. When I saw that I almost busted out laughing. You can tell these people mean business, and just want good people to come in and enjoy their good food. 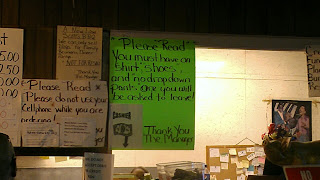 We each ordered the BBQ Plate which comes with slaw, baked beans, and a tea. Dawn's mom was the only one that had the slaw and really enjoyed it. Once the beans cooled down a little we were able to dig in, and they were really good too. I'm a new bean eater, so I wouldn't say take my word on it, but Dawn ate ever bite of hers. I'm not a huge tea drinker, but this was some of the best sweat tea I've ever had in my life. I drank every last sip of it. 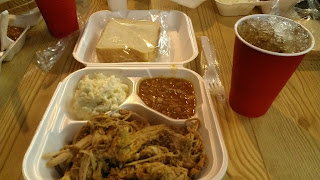 Those little specs you see on the pork is the seasoning and spices. This was some of the spicest BBQ I've ever eaten, but dang was it amazing. It wasn't spicey to the point that it would light your tail on fire, but it was spicey to let you know it was there. Their sauce is a vinegar base and it complimented the spicey Q perfectly. 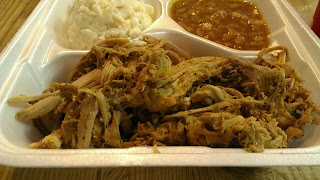 Scott's BBQ is EASILY in the top 5 greatest BBQ joints I've ever been to, if not #1. I would personally prefer some mac'n'cheese or other sides, but that's not their forte so I can't knock them on that.

If you're ever in town ... ok let's not joke, you will never been in town in Hemingway ... so do yourself a favor and go OUT OF YOUR WAY to visit Scott's BBQ (just make sure you go by the bank on the way, because they only accept cash). The building looks like it could fall any day now, but once you taste this BBQ you'll be willing to sit there with one hand in the air to hold the roof up if it came to that to keep eating their BBQ.

Posted by Brandon Fowler at Friday, September 13, 2013 No comments:

Thank you to everyone that helped spread the word, and joined this contest. Keep an eye out, because more cooks, reviews, and contest will be coming.

Special thanks to Pit Bulls Up In Smoke for the deal on the rub and injector. 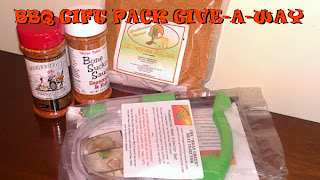 Posted by Brandon Fowler at Tuesday, September 03, 2013 No comments: