There's a local butcher shop/meat packing company that I found a couple of years ago. I say I found it, because it's about 2 miles from my Papa's house, and they've been in business for 60 years ... maybe I'm really bad at finding things. I've been meaning to go by there and picking up some meat to cook, but they're not in the direction we usually go, and I just kept forgetting.

We were out running a few errands, and Rhett was having his annually check up so we were trying to kill a little time. As we were in the grocery store, D looked up at me and said, "Hey, would you want to go over to that butcher shop place to see what they have?"

When your wife not only says you can go meat shopping, but suggests it, you do not pass up on that opportunity.

We had no clue what we were wanting. As we were looking over the price sheet, we heard one gentleman order a 2lb bone in brisket for a stock that he was making, and we both looked at each other and said "aahhh, brisket."

We went with a 10lb cut, and you could tell it was fresh. 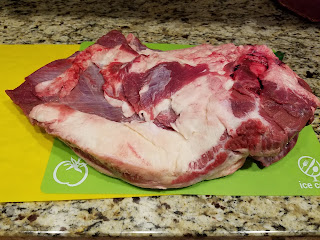 It was a little more fatty on top than you tend to get in the grocery store, but the trimming is part of the fun, so I had no issues with that.

Trimmed most of the fat, arteries, and all of the other gunk off, and cut a piece off the corner so I'd know which direction to slice once it was finished. 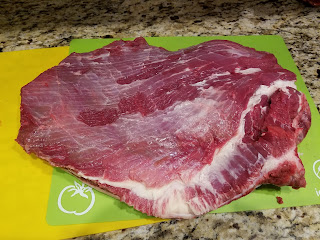 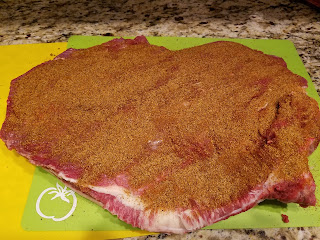 I didn't feel like waking up super early, so threw it on Bullet Bill (WSM) and set my BBQ Guru to 275 degrees. 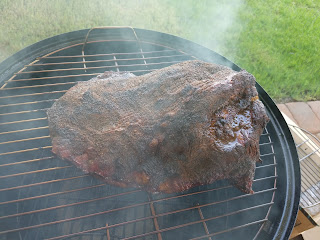 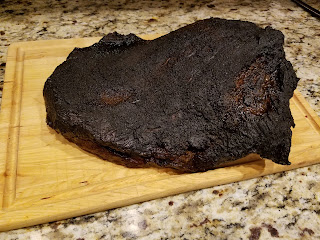 This was one of the most tender briskets I've ever cooked. I know it sounds cliche, but you could taste the freshness of the brisket. One of the best compliments D can give my cooking is when she takes a bite and goes, "mmmmmm". I don't think she said a word the entire dinner other than "mmmm". 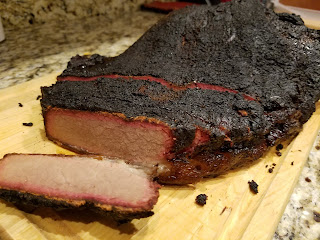 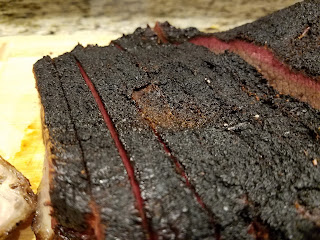 The next time I do a big cook, I will definitely be going back to Vaughn's ... I just may go a little lighter with the Habanero Death Dust.

Posted by Brandon Fowler at Wednesday, August 24, 2016 No comments: