I Went To Phoenix To Watch Some Basketball

For the first time in program history, the University of South Carolina's Men's Basketball team made it to the Four Final Basketball Teams Playing Each Other Portion Of The College Basketball Bracket (I don't think I can "legally" call it the Final Four, so we'll just call it that). Luckily, I have an amazing wife and she didn't put up much of a fight when I asked/told her that my dad and I were going. Honestly, she probably just wanted wanted a weekend alone with Rhett.

We finally found a flight that would get us to Phoenix in time, but that required us to get up at 4:30a.m. and drive up to Charlotte. It was really neat walking through the airport and seeing their video boards proudly supporting Other Carolina's success, along with BOTH of our team's successes. 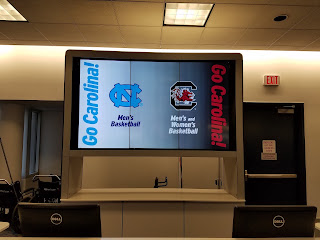 From Charlotte we flew to Minneapolis, and from there it was on to Phoenix. Luckily, that was a much larger plane, so we had our own in flight screens with very recently released movies. If you haven't seen Hacksaw Ridge, I would recommend it. Just know, it's a bit of a tear jerker. 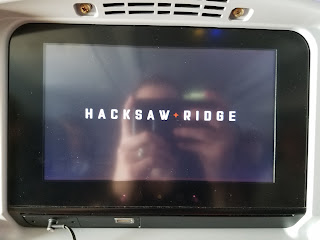 From the time we landed in Phoenix we still had just over 2 hours till tip off ... plenty of time.

On our way out, we picked up our rental car, made it to the hotel, and then called an Uber to the stadium. At this point, time is winding down, but we still have about an hour to go. 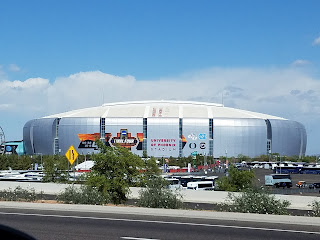 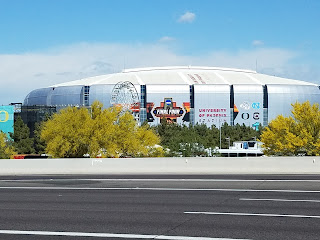 We still needed to go through security before we could even get to Will Call to pick up our tickets. We walk up and the security line is an absolute cluster. It took no less than 30 minutes to make it through a line of just "take everything out of your pockets and walk through." Oh, and don't forget if you have a camera case, you have to return it to your vehicle or throw it away, because you can take in a small pocketbook, but a camera case may ... ?

Ok, so threw the camera case on the ground and stormed off (game was more important than standing there and telling those idiots exactly what I thought about them). We get to Will Call and the following takes place.

Ticket Guy: What's the name?
Me: Give gentleman name (went with first name since my dad and I have the same name it wouldn't have mattered who grabbed the tickets)
Ticket Guy: *searches through tickets* I don't see anything. Where did you get them from?
Me: (Thinking I know we didn't just fly across the nation for nothing) Umm the club itself?
Ticket Guy: I don't see anything, could it be under another name or company?
Me: Oh yeah, it could be under (insert company name) (not telling all you yahoos my hook ups ;-) )
Ticket Guy: Nope, don't see it.
Me: (Pee starts to run down my pants (not really))
Ticket Guy 2: Wait, who did he say?
Me: Repeat company name
Ticket Guy 2: I think it's ... *grabs envelope and hands it through the window*
Me: *Looks down to see what's on envelope ... owner of the company's name*

Ok, so obstacle #2 has been conquered now. We head to the entrance gates ... slam on the brakes ... they're just as lined up as the security lines were. I'm usually a get in line and be orderly person, but I may or may not have cut in line.

We make it in the arena and they're announcing the players. Yes, if you've been keeping up, it took us nearly an hour to make it through security, walk up to Will Call (no line at all), and then even cut in line to get in.

We run around to the other side of the arena and get to our seats just in time for tip off. 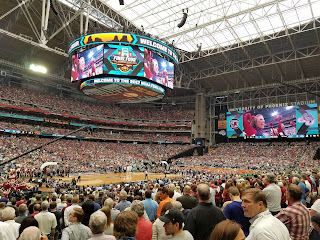 The face you make when you're about to watch your team play in the Four Final Basketball Teams Playing Each Other Portion Of The College Basketball Bracket. 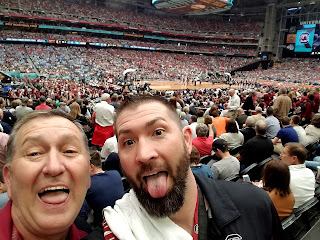 We hung around for some of the Oregon versus Other Carolina game, but then the sandwich we had in Minneapolis was gone, and we had to find something to eat. We walked the entire arena and every line was at least another 20-30 minute wait, so we decided to leave and find one of the places I had found in my searching.

We got back to the hotel and hopped in our rental and headed over to Short Leash Hotdogs. We walked in and there was a line of 5 people or so in front of us. That line took 20 minutes of my life. Once I got to the counter I ordered and my bank thought that that would be a great time to shut my card down since I was traveling and didn't notify them. Well that took another 5 minutes waiting on someone to come over and show her how to back out so I could pay with cash. See what I didn't mention was, the cashier stated that it was her 3rd day working there, and although the Four Final Basketball Teams Playing Each Other Portion Of The College Basketball Bracket and the music festival was taking place right behind the building, they apparently felt she was ready for the task at hand. Nothing against her, she did the best she could, because in reality, there wasn't anything about them that was fast. Once I placed my order it took over 30 minutes to get our order ... oh, and it was wrong.

While I was waiting, I did at least get to check out all of the cute dogs on the wall. 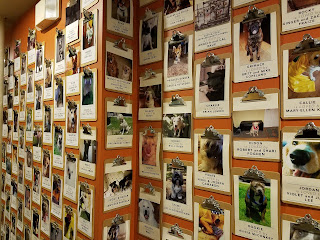 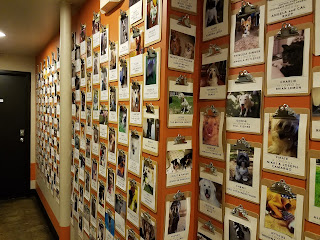 We got our order to go, so I didn't notice it was wrong until I made it back to the hotel. I ordered 2 for me and 2 for my dad. He ended up not eating his because I ordered him chilly dogs and he was afraid it was too late in the night. Well, they got his order perfect, and I only got 1 of my dogs. No picture, but just imagine a hot dog with bacon and cheese on a tortilla shell. Yep, instead of a bun, they use tortillas. The dog, singular, was actually pretty good, but I don't know that it could make up for the delays at every turn and missing one off my order after all of that.

Ok, it's a new day. I had found Matt's Big Breakfast, so we headed over to Tempe to check it out. 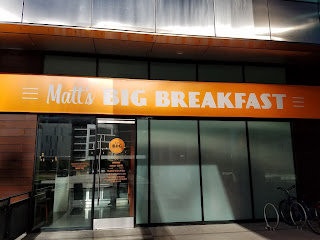 We both ordered The Five Spot that comes with 2 eggs, 2 slices of thick cut bacon, American cheese, and grilled onions. I had mine with no onions and my dad had his with no cheese.

These sandwiches definitely made up for the night before's fiascoes, and the rolls were absolutely delicious. If I'm in Phoenix again, Matt's will be on the agenda for this sandwich alone. 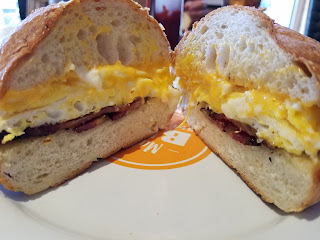 After breakfast we rode out to Mesa so I could go to Harley-Davidson and get my shot glass for the trip. On the way I looked over and saw ... 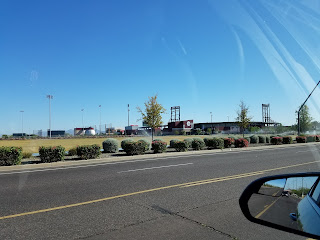 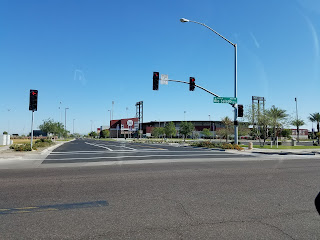 Yep, that's the Chicago Cubs' Spring Training facility. We went on to the Harley-Davidson shop, but came back by and took a few pictures. 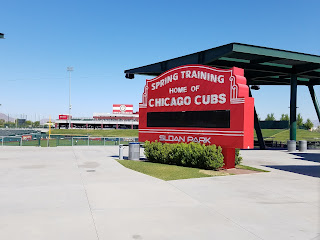 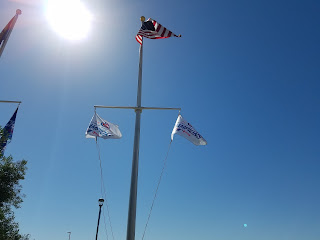 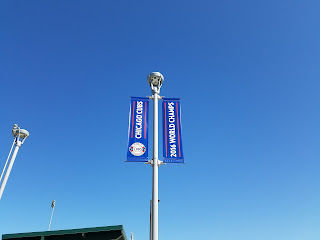 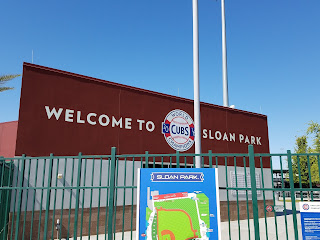 Reordered the pictures to make it a little easier to look at.

I've been to my fair share of Harley-Davidson shops and I have to say, this is probably my favorite. I don't know why I didn't, but I didn't take pictures of the bike "garage" they have to the left, but it was sweet. 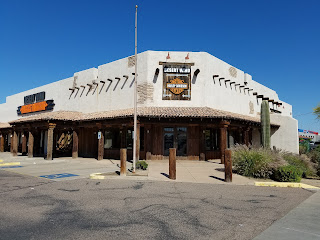 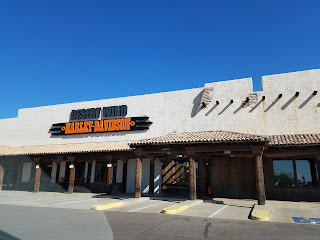 After that we headed over to Chase Field for Opening Day for the Arizona Diamondbacks. 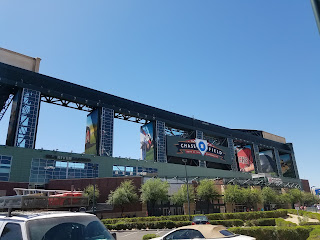 We stepped into one of the opening for the National Anthem, and caught the fly over. 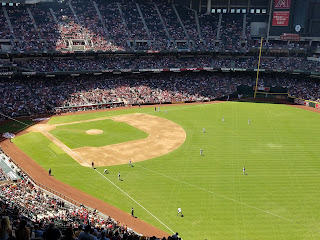 For the first time, team USA won the World Baseball Classic. I'm guessing since the Giants and Diamondbacks had a number of players on that team they decided to have the trophy at the game. 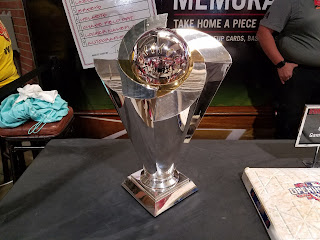 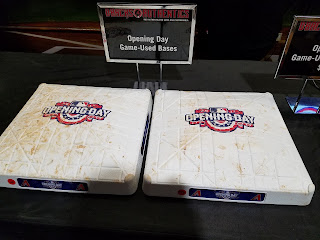 We had to leave the game a little early so we could get somewhere to watch the women's team play for the National Championship. Some restaurant along the way had a Jack Daniels statue painted like the Day of the Dead. 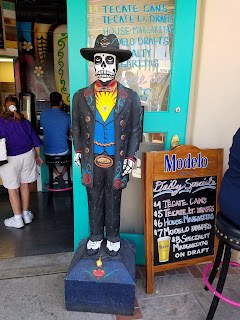 A quick stop into Hard Rock so I could get my glass from there as well. 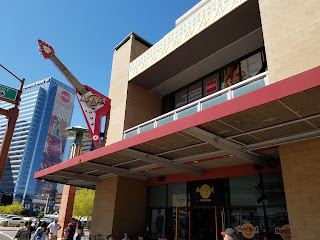 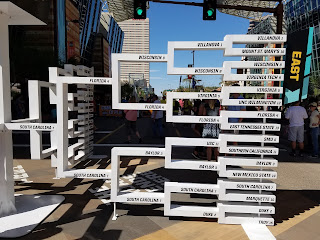 Since our boys didn't make it to the Championship game, we decided to basically give our tickets away and bump our flight home up a day. The same trip back (even had to get up at 4:30a.m. again), so this go around I enjoyed a little "almost Harry Potter". 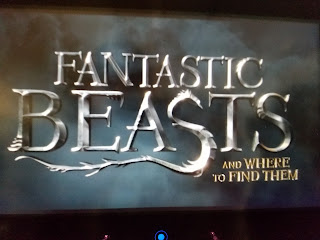 We would have liked it if our guys could have made it to the Championship game, but they fought back and made it a great game, and we had a great time. I would have liked to have been able to spend a little more time in the area, but I didn't have my usual trip companion so it just wasn't the same.

Posted by Brandon Fowler at Thursday, April 20, 2017 No comments: