This week's Throwdown is titled "I'm Absolutely Stuffed". The rules are simple, you cook and post a food/meal that after you eat it you're always saying "I'm absolutely stuffed" ... get it?

Now, we tend to make some pretty delicious meals, and more times than not, I eat way more than I should. However, there's one thing that we make that is 100% impossible to eat and not be miserably STUFFED afterwards, our homemade pizza.

The only problem is, this is for a TD, and you have to smoke or grill all entries, and we've only baked pizza before. I've seen on the Brethren where people would grill pizzas, but I've never given it a try ... until now.

That's not the only new thing we tried for this TD. To also make a little play on words, we decided (ok, it was Dawn's idea) to attempt making our own stuffed crust.

Our full ingredients (minus the bacon that was thawing out) 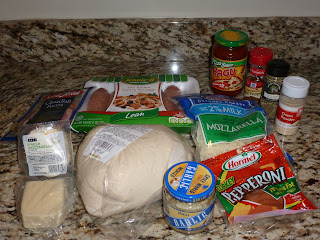 As I was cooking the bacon and sausage, Dawn rolled out the dough and started the stuffed crust with slices of mozzarella. 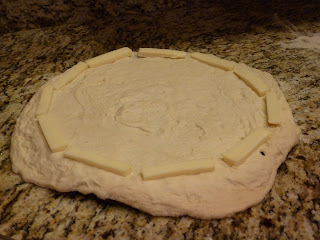 She then rolled the edge over the slices of cheese pressing the dough together to hold, and then sprinkled some parmesan on top. 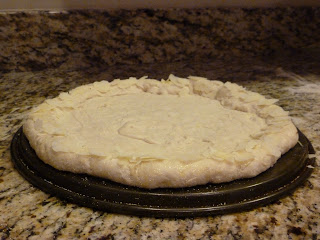 It was then time to add sauce and herbs. 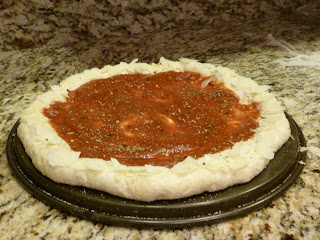 Once she had the base ready, it was time for assembly. I put down a layer of Canadian bacon slices, spicy turkey sausage, bacon, turkey pepperoni, and then covered with fresh and shredded mozzerlla. 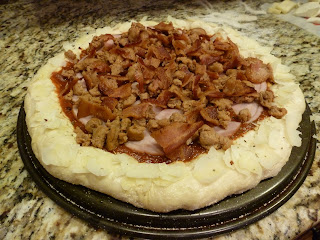 Some how moisture built up between the dough and pan, and with the weight of the pizza, we weren't able to slide it off directly onto the grill. Every attempt to move it almost tore the whole thing apart. 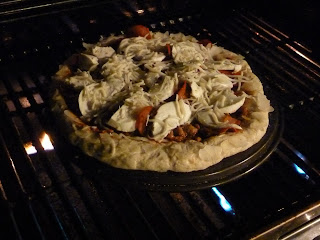 After 15 minutes on the grill at 400, it was time to eat. However, due to the moving around trying to get it on the grill, some of the crust came apart and didn't stay rolled up all pretty like. 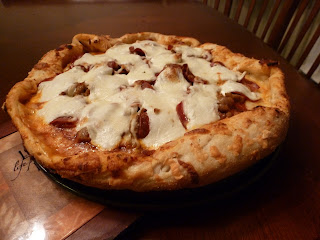 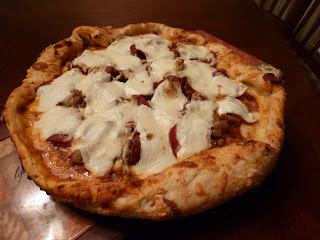 We were both shocked at how different the pizza really tasted versus cooking it in the oven. Having it over an open fire really gave it that brick over style taste (now, I'm not saying it taste just like a brick over pizza).

We both have been converted to grilled pizzas ... now to just figure out how to get it off the stinking pan, or to just use our pizza stone next time.