We finally made it out to the local Craft Axe Throwing (insanely fun) place for my birthday, and afterwards decided to head into TR (pronounced "Tee" "Arah") for dinner. I kept hearing mixed reviews from friends and family, but figured it was time to try out Monkey Wrench Smokehouse.

We went with some friends, so we decided to do this community style. The girls split the smoked BBQ potato, and both really liked it. I mean, what's not to like about a smoked potato with all of the fixings and BBQ inside?

The guys got The Smokehouse, which is their super combo plate. It comes with pulled pork, brisket, half rack of ribs, wings, sausage, cornbread, and chose to go with the mac 'n' cheese, hushpuppies, and potato salad for our 3 sides. 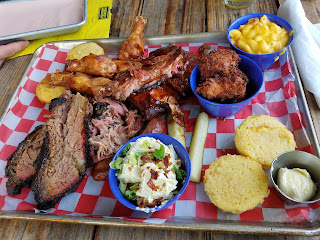 The only way to really review this honking display of food is to go one by one, so starting bottom left and making our way around ...

Brisket - The rub is really good, and the flavor on the outside with the smoke was good. It was cooked way over though, and even being cut nearly a 1/4 inch thick (maybe wider), it still just fell a part. The inside just tasted like roast beef. Brisket is supposed to be cut in slices, not slabs.

Pulled Pork - Flavor and texture on the pork was really good.

Ribs - These were actually cooked extremely close to accurate temp. They were a hair over. Still held together, but fell off a little more than "nailed it" (we're talking about 15 minutes). My biggest issue with them is they were just absolutely caked in sauce. Usually the sauce, if added, is added towards the end of the cook so it'll hold to the meat, but these were just dripping. 15 years ago, I would have rolled around in these.

Wings - The wings were delicious. They could add more of the seasoning/rub to them, but it's smoked wings and that's always a good thing.

Hot Link Sausage - If I said it was overcooked, it would be an extreme understatement. This thing looked and tasted like it'd been cooked about 5 times. I don't know if this isn't a big seller for them, so maybe it's stuck around for a while, but absolutely obliterated. It reminded me of the turkey from Christmas Vacation.

Cornbread - It wasn't complete opposite of the sausage, but it could have stayed in the oven another couple of minutes. There were pieces just a hair under.

Potato Salad - I don't eat it, so I don't have a clue. I believe the others liked it though.

Hushpuppies - You can see from the picture, they were overdone as well. They weren't loaded down with onions like some places do, so they were still good.

Mac 'n' Cheese - A little on the greasy side, but good. Mac 'n' cheese is one of those, it's hard to make bad, but it's hard to blow your mind (unless you make mine).

So that was our experience. Some good, some bad, a whole lot of inconsistencies with cook times. I think the flavor of the food over all was pretty good, but take brisket off the menu if you're going to cut it that thick (before someone from Texas comes in and laughs at SC), and just tweak everything else.

I feel like I'm being a little more critical and harsh here than I usually am, but my home town has been a small town my whole life and is trying to turn into a "foody" spot with numerous new modern restaurants opening the last few years. Even before this recent development took place, it desperately needed and deserved a good BBQ restaurant. Monkey Wrench is going to be successful because of their location, it's a fun little area, you can enjoy a cold beer and entertainment outside, and the food is good enough. Is it the BBQ joint to bring people to and remember TR for? I don't believe so.