With the number of times we've been to Atlanta, I can't tell you how many times we've passed Daddy D'z and I've wondered why we never stop in. Before this last trip, I was looking for new places to eat and found Daddy D'z on multiple "Best BBQ in Atlanta" lists. I decided that before we did anything else on this trip, we were going to Daddy D'z to eat.

We pulled in at 1, and the parking lot was packed and filled with the smell of deliciousness and smoke. 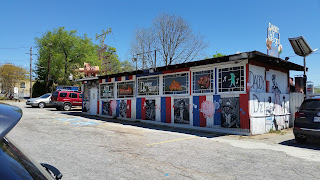 I went with the sampler plate (we should have split), which comes with 6 Que Wraps, 2 Ribs, Beef, and Pork with 1 side and cornbread or roll. 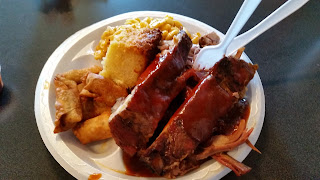 The Que Wraps are pulled pork wrapped in wonton wrappers and deep fried that you take a dip into BBQ sauce. If that sounded amazing, it's because they were. It's like bite size BBQ crack. I could have eaten a plate of just those.

The beef and pork were both pulled in long strands hiding under the ribs soaking up all of yummy goodness dripping off of them. The ribs were absolutely delicious and sloppy messy like ribs should be.

The ribs, pork, and beef were all very good, the Que Wraps were absolutely killer, but the macaroni and cheese absolutely blew my mind. It was like a mixture of that country meat and 3 restaurant with black pepper and it seemed like a little smoke. This is top 5 best mac n cheeses that I've ever had in a restaurant.

Their sauce was a little heavier on the vinegar sauce than I prefer, but the food was on point.

Back before Dirt Mountain happened, I wanted to put a cover over the cooking area and build out a deck/patio with a dinning area and fire pit. Well, to stay in the political world, I didn't have enough delegates and my idea was vetoed.

As the new year came around, we started talking about the patio idea again. The original idea was that we would do the project in parts. First would be the cooking area, then we'd do the dinning area, and finish up with the fire pit section. After some discussion we decided to bite the bullet and complete the project in whole so we can actually enjoy it this year. 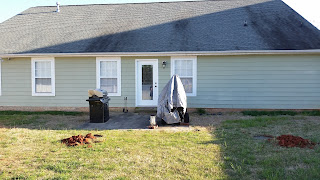 Day 2 - Met with the guy doing the stone patio portion to finalize the layout and all of the details.

Day 3 through 13 - No progress due to finishing other jobs, weather, and sick kids (see, no project goes smoothly for us)

Photos courtesy of our security cameras. 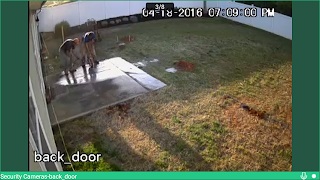 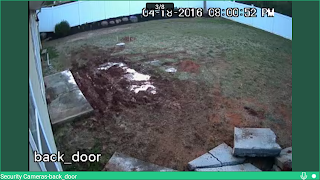 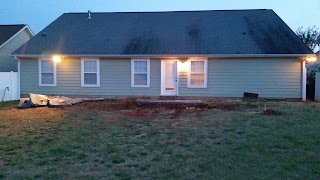 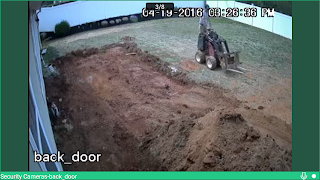 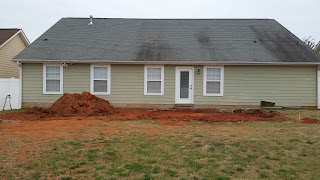 Day 16 - The first block is laid down, and ultimately turns into our future step (top not completely). They also laid down and compacted most of the gravel. 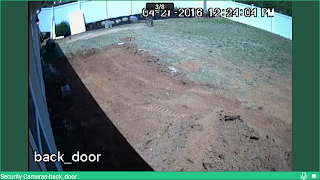 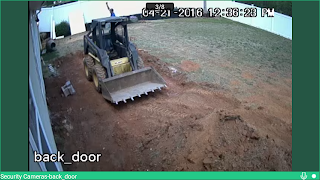 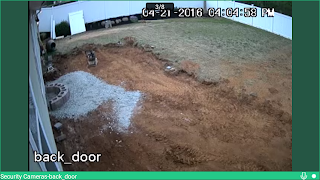 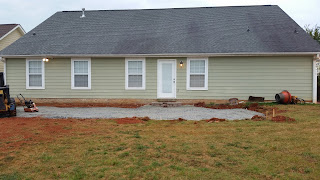 Day 20 - The rest of the foundation has been laid out and compacted. 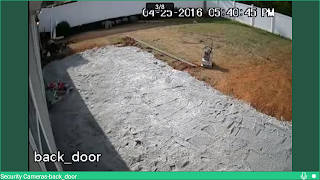 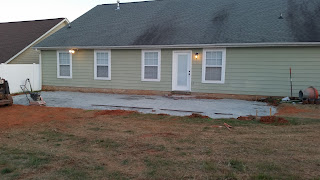 Day 21 - They're leveling the area, and hopefully will be putting some pavers out. 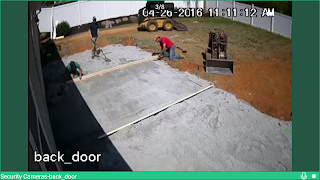 Day 22 - They start where they left off. Pavers should be finished up today. 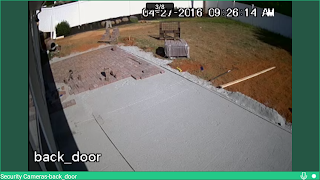 The patio is nearly laid out, and fire pit has be put in place. 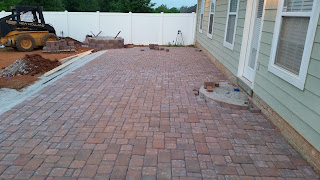 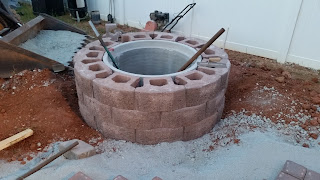 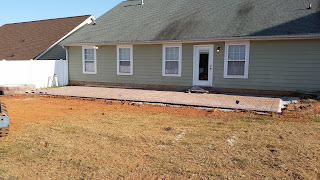 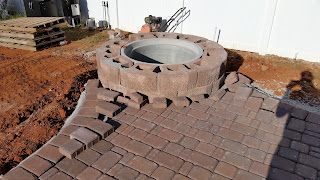 Day 29 - Things have been a little crazy this week, so I haven't been able to get any pictures of the progress. The patio is set and the barrier concrete is poured to hold it all in place, and the step out of the house is finish. Earlier in the week they dug the trenches and rebuilt our irrigation in the backyard (that was destroyed when we put up the back fence ourselves, and when we did the wall last year). Currently, our backyard is a solid dirt field being leveled out to have the new sod placed down.

Spoke with the roof builder earlier, and we will be going over final plans tonight to have that portion begun tomorrow.

Day 33 - We were surprised when we came on Thursday that we had GRASS!!!! Since dirt mountain nearly 9 months ago, we haven't had an entire yard of grass (there is a small patch at the side gate still missing grass, but that's so they can finish a few things in that area). The sprinklers in the backyard work, the sod is down (but not flattened completely), patio is 99% finished (mostly just have to put the cap on the fire pit), and the work on the roof over the cooking area will begin today. 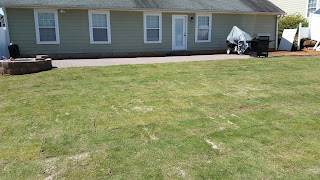 ***In case you were wondering why there weren't any updates last week. It's because there weren't any updates. The roofer got there on Monday and put the poles up. Then one of our lovely neighbors decided to call the city on us and have an inspector come out and learn that we didn't get whatever proper permits we needed. So now a week and a few hundred dollars in permits later, he will return tomorrow for the inspector and to continue work.***

Between a week of delays and then a week of rain, I lost track of what day number we're on, so I'll just keep the highlights coming. 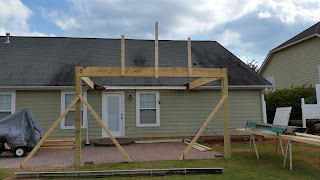 He had a few helpers, and nearly knocked out the frame work. It's starting to come alive. 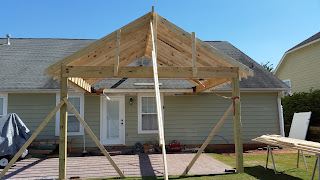 The remainder of the framing is finished (check out the bird flying). 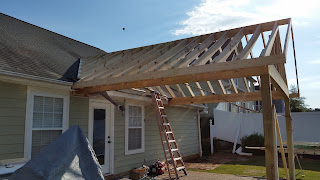 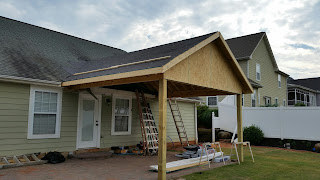 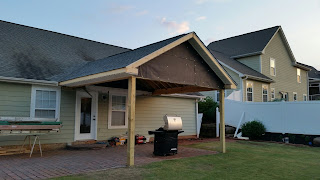 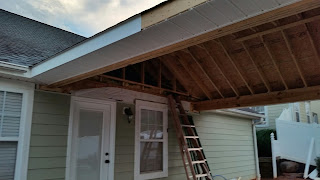 So I stopped doing updates on the progress, so I could just take final pictures of the project. Since then it was a bit of a task to get our yard guy back out to put the finishing touches on the fire pit, sod, and gate. Well, he came out yesterday, and our backyard is FINISHED!

So, after 77 days from the first holes being cut ... we have a backyard again.

Posted by Brandon Fowler at Wednesday, April 06, 2016 No comments: