Similar to our Christmas Eve Steaks have become a tradition, our 4th of July Celebration isn't complete without hotdogs.

If you follow my Facebook page (I feel cool, I just linked 3 things in 2 sentences), you saw the spiral hotdogs a few days ago. I figured I would give that a try this year, but didn't want to stop there.

Got some thick cut bacon precooked in a pan. 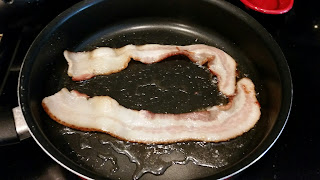 While that was going, I added some Patriotic Rub to my crinkle fries and the wifey's sweet potato fries. 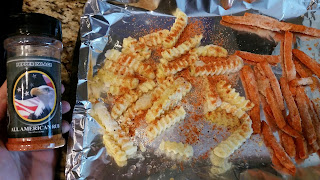 She didn't want her boring turkey dogs spiraled, so I just did my Ball Park bun length franks. You know what Michael Jordan says ... "It's just not Summer, till you've had your Ball Park franks." 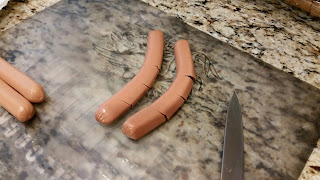 Ok, back to business. So I took the precooked bacon and wrapped it around by dogs, holding it with some toothpicks (tip, wrap the toothpicks with tin foil so they won't catch on fire). I think did something completely wild and crazy ... I sprinkled the Patriotic Rub on top of the dogs.

(The bacon and seasoning were my wife's idea....because she's amazing.)
(You can probably figure out who wanted that line in here.) 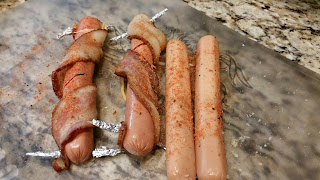 The only way to make this picture more American, is to have the bottle filled with British tears. 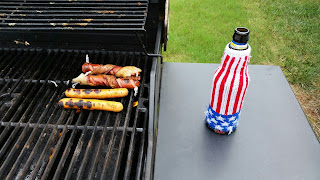 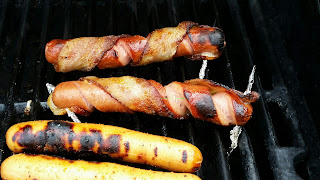 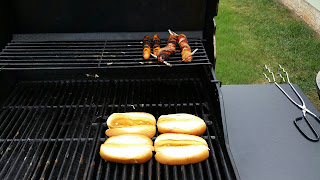 Brought the dogs in and added a little cheese to the top. She also added some chili to hers. 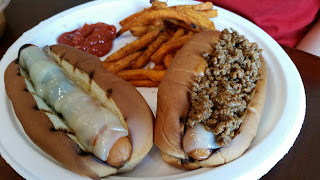 I sprinkled some shredded cheddar jack on top of mine and left it alone. 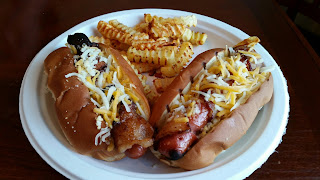 I don't know if it was the spiral, the bacon, the rub, or the cheese that made these amazing ... but these were some of the best hotdogs I've ever made.

America is in trouble. She is divided like never before, and is being torn apart from the inside out. I'm not talking about politics here. I'm talking about the American Dream. The American way of life.

While I watch the news, I see people complaining because they want $15 an hour for an entry level job, they want more government assistance so they can kick back and do nothing, and they blame others for their failures in marriage, work, and every other aspect of life.

While watching the same news, I see interviews with people that move to America with just the clothes on their back. They drive to become American citizens as quickly as possible. They don't look for hand outs. They work their fingers to the bone and put it on themselves to achieve success. They have more pride in America and what she stands for than a lot of people born in America.

America became a nation 237 years ago today thanks to countless men who fought and gave their lives for this nation. They didn't do that for a flag, plot of dirt, or to be "cool" with the ladies. They did it for freedom. They did it for my freedom. This country is now failing, because there are millions that wake up spoiled by freedom every single morning. It doesn't necessarily make them wrong to be spoiled by freedom. After all, I'm sure those that fought to make this country dreamed that one day Americans would wake up and their biggest worry would be what picture to use as their new profile picture.

(I couldn't do a post with music, and not include Elvis)

What scares me the most about the future of America, is that I think too many have gotten complacent and just assume we'll always be free because, to them, we always have been so what's to worry?

America needs help right now. America needs more patriots. Now, I'm not saying everyone needs to run out and join the military. While I will be forever grateful to every man and woman that has sacrificed their time, their youth, and sometimes their lives, that's not the definition of a patriot. A patriot is someone that has passion for their country and is prepared to defend it against all enemies. Again, I'm not saying run out and join a militia against the government (I'm not telling you not to either). A patriot is someone that is willing to sacrifice for their country. That doesn't mean that it has to be in battle. Simply refusing to sit at home and be dependent of others, and instead, going out and getting a job to better yourself, your family, and the economy, is a patriot. When you fail, if you pick yourself up and say, "I'll do better next time", that's being a patriot. Shooting for and achieving the American Dream, is one of the most patriotic things any American could do.

(While we're talking about patriots, how about The Patriot. Not only was his gimmick one of my favorites, he's also a former South Carolina Gamecock football player.) 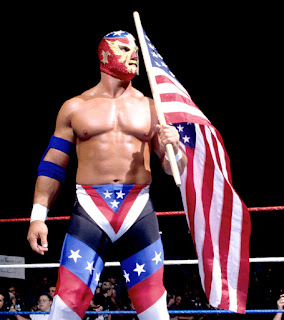 On this 4th of July, grill your hotdogs and hamburgs, crank up the radio, hang out on the lake, drink a bunch of beers, but make sure you have an American flag flying near by. For the past 239 years, the world has envied the United States of America and what she stands for. We need to do our part to make sure that our generation isn't the one that brings her to her knees. There are MILLIONS of people on this Earth that would give anything to be able to call themselves Americans. I'm PROUD to be an American, and I will do absolutely everything in my power to help keep her free.

(If you're ever able to go to an Atlanta Braves home game, go on a Sunday. Timothy Miller is a member of the Atlanta Opera, and he's worth the price of admission.)

Happy 4th of July everyone, and
GOD BLESS AMERICA!!!!!

Posted by Brandon Fowler at Saturday, July 04, 2015 No comments: