Gringos is a new South West Mexican style restaurant in Downtown Greenville. I have to be honest, when I first heard about it, I swore it off. When I eat "Mexican", I don't want some interpretation. I want it from people that actually know what they're doing. The name Gringos made me think this was a bunch of white people (Gringo) making Mexican food. It's still kind of like that, but it's not a Mexican Restaurant, so I'm able to let it slide.

We went to Fall For Greenville (Fall Down In Greenville as most of us know it), a few months back and ended up trying their tacos. It didn't hurt that they were the only ones with some what reasonable prices for the amount of food you were getting.

Dawn got something weird, and I got the Bacon Cheeseburger Taco ... yeah. We both really enjoyed it, so I agreed to give it a shot.

Now, a little back story ... Dawn is the easiest person in the world to get with surprises, but she has a really tough time getting me with one. Now, she'll hit me with a surprise cupcake or something every now and then, but I mean a REAL surprise. Well, an envelope came in the mail one day, I saw it was for her so I just put it aside. She asked when she got home if I saw who it was from, and I told her no (the truth). Then she told me I had to wait before she'd tell me.

She had me in suspense for nearly 2 months, but on the day of, surprised me with tickets to the So You Think You Can Dance tour. Possibly one of the least "typical manly" things about it, I love dancing and love SYTYCD. The tickets weren't the cheapest, so I told her it was ok if we didn't go. She definitely got one on me.

Ok, back to now, throughout the day we were trying to make plans for the show that night. One of us suggested Gringos since we both liked it, and it was within walking distant of The Peace Center, where SYTYCD was performing.

Dawn got the Locos Chicken Burrito. She said it wasn't her favorite burrito, but still pretty good. I think the wrapping process made a few bites be all beans or all something else instead of even bites. 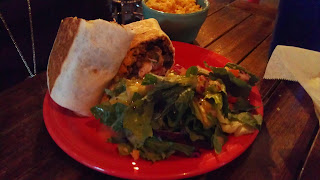 I really try not to be "that guy" in public taking pictures of food, so I try to do it quickly ... hence the bad quality. 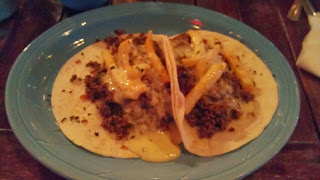 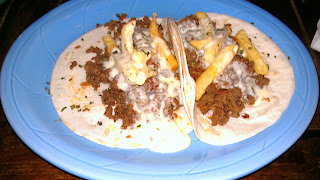 I've heard a lot of talk about Gringos, but it was really empty in there when we went. It was earlier in the night on a week day, so I'm sure that had a lot to do with it. All I know is we both really enjoyed the food, and will be going back. White people making Mexican ... you've finally won me over.