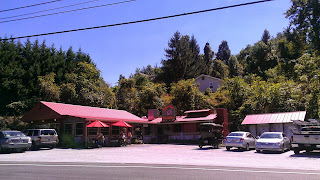 Every year I have to perform my husbandly duties and go apple picking with the wife. It's not something I thoroughly enjoy but I don't mind it either, and it makes her happy and that's the point right? This year we went to Sky Top Orchard, so we decided to find a new BBQ restaurant to try on the way.

We found a couple of different places, but just our luck, most weren't open on Sunday. The one that was in the final list and actually open on Sundays was Green River Barbecue. It had good reviews and Dawn said that she had eaten there before (probably with some dumb guy before me).

It actually worked out perfect for us, because Green River ended up being a few minutes away from the orchard, and the gps took us down some neat back roads.

I ordered the small pulled pork plate ... yes, apparently this is the small ... with green beans, mac n cheese, and fries. As you can see from the picture, the pork was a little soupie. I'm not sure where the liquid came from, or what it even is. Minus the liquid in the pork, everything else was good. The sauces were really good. 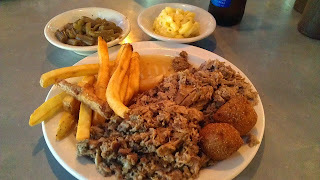 Dawn got the brisket plate with hush puppies, baked beans, and sweet potato crunch. Unlike the pork, the brisket was a little dried out, but she still like the flavor. The beans came out the temperature of the sun, but once they cooled off she really enjoyed them as well. 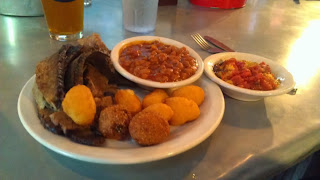 This is a good place to stop and have a good beer and good food if you're wanting to take a little cruise through the mountains.